The FAA has released internal orders regarding drone operations near airports.  Here are a few observations on my read of the FAA order.

This doesn’t change the rules that hobby operators have been following, but it does clarify with the tower operators that they are not granting permission, simply acknowledging that there will be UAS operations near the airport.

The order goes further to describe the process for automatic permission for Part 107.  Part 107 pilots need approval, not just notification.  And the towers have not received any instructions on how to approve commercial Part 107 flights in their surface areas, only to say “no”.

As I mentioned in an earlier post, (Air Traffic Organization Policy) the FAA is planning an automated system for Part 107 flight approvals near airports.  About a year ago facilities were told to mark up a map of their area based on their knowledge of local traffic.  What they’re doing is taking slices from their perfect “upside down” wedding cake airspace structures. 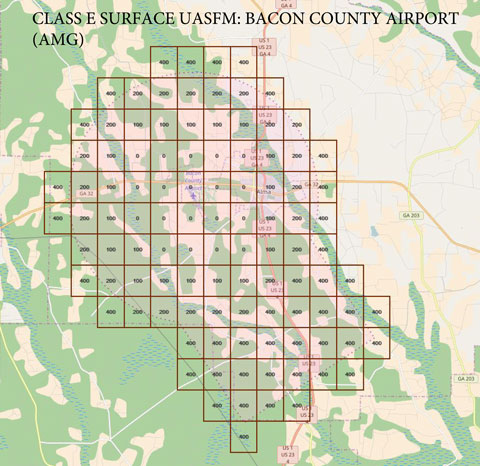 It’s a bit difficult to read even on the FAA website, so let’s zoom in a bit: 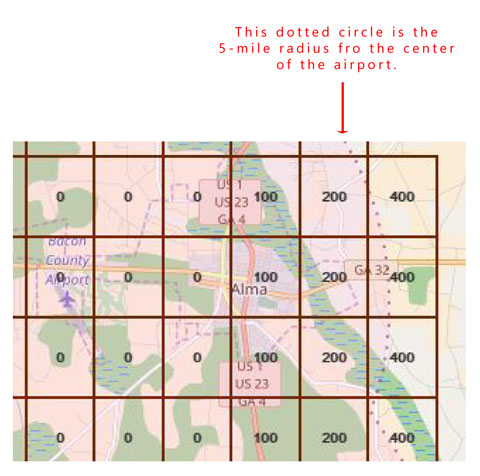 Here’s how it’s supposed to work:

Let’s suppose you plan a flight not to exceed 50-ft that will be near the intersection of US 1 and Georgia 23.  Since the tower facility has already determined that UAS flights in that grid up to (not including) 100 ft will not be a hazard to air navigation, your approval will be automatically granted.  The grids, by the way, are 1NM square.  If your flight might create a hazard, say for example that a helicopter-crane will be lifting an air handler on a building in your grid, the facility will contact you to make sure there’s no conflict, or to deny the authorization.

The URL is shorter than the title:
https://www.faa.gov/uas/request_waiver/

The form is a bit long, but in most cases the approval will be fast.  If your planned flight meets the predetermined criteria for a safe flight, then permission is automatic and notification to the tower is done.  Just go fly according to your flight plan.

Right now it’s for Class E airspace only; the FAA is testing the system before moving to higher classes of airspace.

For more information, go to the FAA’s FAQ page:
https://www.faa.gov/uas/request_waiver/uas_facility_maps/faq/