“83 ft” is an erroneous reading of Causby v U.S. Army Air Corps.  (The Air Force wasn’t created until September, 1947).  US v. Causby, 328 US 256, 264 (1946) holds that a landowner owns as much of the airspace above his or her property to which he or she can reasonably use, and any invasion of that airspace is a trespass subject to damages.  This is also known as the “enveloping atmosphere” rule.  Likewise, that airspace above the “immediate reaches above the land” is part of the public domain, not subject to trespass.   The result was a newly created doctrine articulated to protect landowner rights while giving aircraft the right to fly over private property:

“If the landowner is to have full enjoyment of the land, he must have exclusive control of the immediate reaches of the enveloping atmosphere. Otherwise buildings could not be erected, trees could not be planted, and even fences could not be run. . . . The landowner owns at least as much of the space above the ground as he can occupy or use in connection with the land.”

The Causby case was a 5th amendment case of taking private property. The finding of the Causby case was that the farmer’s property was “taken” by the government (US Army and Navy) by low flying aircraft in violation of the farmer’s fifth-amendment rights. The “83 ft” was simply an observation by one of the justices and not a finding or legal precedent and not in the scope of the original case.

No federal court has adjudicated airspace ownership.  (If there has been one that escaped my search, please provide the citation).

Some people say that they “own the easement” above their property.  This is, again, a badly misunderstood subject.
An avigation easement is a property right acquired from a landowner which protects the use of airspace above a specified height, and imposes limitations on use of the land subject to the easement. 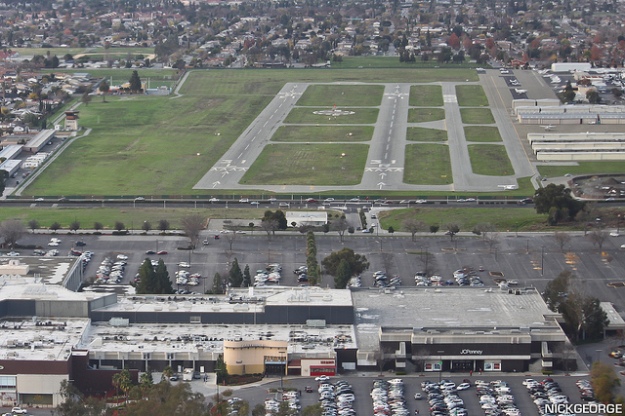 For example, notice the shopping center adjacent to the airport. The owner of the shopping center has an avigation easement that prevents any further development or use of the property. They cannot build up nor can they put a new building in the parking lot. The value of the lost revenue is the basis for the cost of the easement from the FAA and is negotiated at the end of the easement term. Similar to an eminent domain taking, a property owner cannot refuse an avigation easement.
Private avigation easements are exceedingly rare, but they do exist. Mostly in remote locations where an airport abuts private property with tall trees. The avigation easement allows the airport operators to remove or top the trees that could interfere with the use of the airport.
For more information, see: www.irwaonline.org